With its 600 million users, Dropbox is one of the most popular cloud storage services in the world. Individual home users rely on it for seamless file synchronization across devices and reliable backup, while businesses enjoy its secure file-sharing and content collaboration capabilities.

Despite its intuitive user interface, there are many Dropbox users who want to know if it’s possible to recover deleted Dropbox files that have become the victims of careless file management, malicious act, or some other cause of data loss. We can tell you right now that it’s not only possible to restore deleted Dropbox files, but there is more than one way to do it.

Help! My Dropbox Files Are Missing!

Have you accidentally deleted the wrong Dropbox files and are wondering how to get them back? You’re not the only one! Many users have found themselves in the same situation. Just read these pleas for help gathered from the web:

We don’t know whether these three Dropbox users were able to successfully restore Dropbox files, but we know several Dropbox recovery methods that you can use to get your files back in no time.

Even free Dropbox users get 2 GB of storage space, which is plenty for thousands of documents or hundreds of images and audio files. What sometimes happens (especially to those who don’t spend much time or effort on file management) is that users misplace their files and assume that they are missing because they’ve been deleted.

To rule out this possibility, you should search for your missing files on dropbox.com:

Don’t see your missing files? In that case, they’re most likely deleted, and you need to recover them using the methods described below.

There are several native Dropbox undo delete solutions that you can use to get your deleted files back. If they fail, you can also explore alternative ways to recover Dropbox files, such as third-party data recovery software.

Dropbox has its own implementation of the Recycle Bin (Windows) and Trash (Mac), called Deleted files, and you should visit this special folder every time you want to get back a file that’s no longer present in your Dropbox folder.

Tip: If you want to recover multiple files at the same time, click the checkbox next to each file and then select Restore on the right.

The Deleted files page is great for recovering recently deleted files and folders, but it won’t help you get back an older version of your file. To do that, move on to the next method.

Imagine that you’re editing a large video file and make major changes to it. Confident with your results, you delete your backups to save precious Dropbox storage space and go to sleep.

When you wake up the following day, you realize that the edits you made are far from great, but your backups are already gone and unrecoverable. Fortunately, Dropbox makes it possible for you to preview and restore older versions of any file with a few simple clicks thanks to a feature called Version history.

To restore an older version of a file using Version history:

Just like that, you can undo unwanted changes and save the day. But what if you need to undo a large number of changes at once or recover after a major data loss incident, such as a ransomware infection? Dropbox has a solution to this problem too!

Important: Dropbox Rewind is not available to free users. Only Dropbox Plus, Professional, and Business subscribers can use it to recover after a major data loss incident.

By using Dropbox Rewind, you will undo file edits, renames, additions, and deletions, as well as actions taken in shared folders, including those owned by other people, and actions taken in your Dropbox Business team folders.

You can think of Dropbox Rewind as the nuclear option for Dropbox recovery. Before you use it, we highly recommend you explore the two remaining ways to recover deleted Dropbox files.

If you use Dropbox to synchronize your files across multiple devices, you might be able to restore deleted Dropbox files from a device that hasn’t synchronized yet.

Keep in mind that the Dropbox app on the device will automatically start synchronizing as soon as it establishes a connection with the central server, so make sure the device can’t connect to the internet before you turn it on.

With data recovery software, you can recover even permanently deleted Dropbox files that can’t be undeleted using the native Dropbox undo delete solutions described above.

Solutions like Disk Drill can recover Dropbox files from all commonly used file systems and with just a few clicks. They scan your storage device, looking for traces of deleted files, and make it possible for you to retrieve all files that haven’t been overwritten.

With these 5 steps, you should be able to recover even permanently deleted Dropbox files from any device.

Why Are My Dropbox Files Missing?

Are you wondering why your Dropbox files are missing? Let’s take a closer look at five common reasons why Dropbox users are forced to research recovery methods:

While some of these causes of Dropbox files going missing can be avoided by being more careful and taking proper measures, others cannot, which is why it’s so important to know how to recover deleted Dropbox files.

Can I Recovery My Dropbox Files from Cache?

Not many Dropbox users know that Dropbox sometimes doesn’t delete files from the hard drive as soon as you click Delete, especially when deleting a large number of files at the same time. Instead, it keeps the files in the Dropbox cache folder, where they stay for up to 3 days before they are automatically purged. Files are also kept in the cache folder for efficiency and emergency purposes.

Here’s the location of the Dropbox cache folder on Windows, macOS, and Linux:

If you’re wondering if it’s possible to recover deleted Dropbox files from the cache folder, we have bad news for you: it isn’t.

Unfortunately, the files present in Dropbox cache on Windows, macOS, and Linux look nothing like the files in your Dropbox folder. That’s because they are only file fragments and not entire files. While it might be theoretically possible to extract some information from them, doing so is far beyond the skills and capabilities of the average Dropbox user. 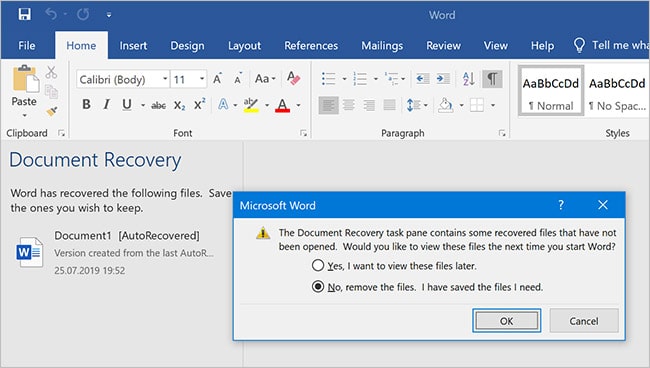 (Solved) How to Recover Deleted Word Document
Fortunately, Word document recovery doesn’t have to be complicated.

As any seasoned data recovery professional would tell you, even the most reliable data backup strategy can fail, and cloud storage solutions like Dropbox are no exception. Here are a few useful tips and tricks to help you avoid Dropbox data loss:

Dropbox Basic and Plus users have 30 days to recover deleted files or restore older versions of existing files. Dropbox Professional and Business users can do the same within the last 180 days.

Is it possible that Dropbox could delete files by itself?

While there are some documented instances of a Dropbox bug causing data loss, it’s extremely unlikely that you’ll ever experience the same thing. Most Dropbox users lose data because they make a mistake and delete important files without even knowing about it.

Is it possible to bulk restore deleted files from Dropbox?

Yes, you can restore deleted files from Dropbox in bulk either by rewinding your Dropbox account or a specific folder to an earlier state or by selecting multiple files in the Deleted files folder.

How does Dropbox delete files?

Dropbox uses a secure file deletion process that makes it impossible for anyone to recover deleted files. That’s why it gives its users up to 180 days to change their minds.

Will uninstalling Dropbox delete my files?

No, it won’t. Dropbox stores your files on remote servers, and so won’t lose anything by uninstalling the Dropbox app or even deleting the local Dropbox folder.

How to Recover a Deleted or Unsaved PowerPoint File

How to Recover a Deleted PDF File: A Comprehensive Guide

Pandora Recovery is striving to bring you informative blog posts and product reviews that revolve around data recovery and protection.
POPULAR POSTS